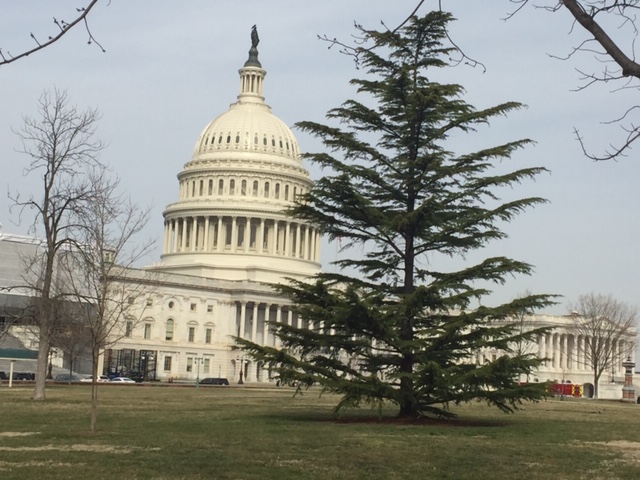 “[M]ost employees face financial responsibility far greater than the statutory minimum annual deductible of $1,400 for an HSA-qualified plan, but another part of the plan design (perhaps copays for office visits and prescription drugs) disqualifies them from opening and funding a Health Savings Account. This bill, if passed, would extend the benefits of this financial account to them.”

Decoupling isn’t a word that you hear often anymore – at least not since passenger trains and model railroading lost favor with the public. But it’s an important term that’s being discussed on Capitol Hill these days as members of Congress debate the best way to help Americans manage their healthcare and finances amidst a pandemic.

The concept is simple. Under federal law, people who want to open and Fund a Health Savings Account must be enrolled in an HSA-qualified medical plan. The medical coverage and the financial account are coupled – an individual can’t have one without the other.

Several members of Congress have raised the possibility of decoupling the two during the pandemic. Their legislation would allow anyone with any form of insurance to open and make or receive contributions to a Health Savings Account during the current pandemic. It’s not a new concept, but it’s being viewed in a new light during this emergency period.

The Case for Decoupling

Supporters of decoupling have always argued that allowing more people to open and fund Health Savings Accounts helps families with high medical bills. The financial fortunes of a neurosurgeon or movie star don’t change much if she can exclude $7,100 (2020 figure) from her taxable income. But a family earning $67,000 with a sick child or parent with a chronic condition benefits a lot from about $2,000 in tax savings.

Many of these families aren’t enrolled in HSA-qualified coverage. But among the 82% of employees whose coverage is subject to a deductible, the average deductible is $1,573 for self-only coverage. In other words, most employees face financial responsibility far greater than the statutory minimum annual deductible of $1,400 for an HSA-qualified plan, but another part of the plan design (perhaps copays for office visits and prescription drugs) disqualifies them from opening and funding a Health Savings Account. This bill, if passed, would extend the benefits of this financial account to them.

Current regulations for HSA-qualified plans don’t accommodate innovations that are important in managing cost and quality of care, particularly during a pandemic. Congress recently passed legislation temporarily permitting telemedicine below the deductible. But other innovations, like direct-primary care (an independent doctor that charges a monthly fee to manage care, understand patient preferences, and steer patients to cost- and quality-appropriate specialty care) and convenient onsite workplace clinics to treat common conditions, disqualify a participant from making or receiving account contributions. This bill would allow people enrolled in more innovative medical coverage to open and fund Health Savings Accounts.

Also, Medicare is disqualifying coverage, which affects the growing number of working seniors who have no choice but to enroll in Medicare if they need to supplement their earnings with Social Security benefits or work for small companies. Working seniors generally earn below-average wages and remain employed as their wealthier contemporaries enjoy full retirement. They can’t accept tax-free employer contributions or reduce their taxable incomes with pre-tax payroll contributions, as their younger co-workers can. These working seniors would be allowed to open and fund Health Savings Accounts if this bill becomes law.

Finally, especially during a pandemic, there’s a greater risk that state legislators or insurance commissioners pass mandates that disqualify everyone enrolled in an HSA-qualified plan governed by that state. The American Bankers Association HSA Council works closely with the states, following a well-intentioned Maryland mandate of vasectomies with no cost-sharing that disqualified not only men, but also women, in Maryland from funding a Health Savings Account. During the current pandemic and economic downturn, states are more likely to pass mandates or regulations to ease patient financial fears – perhaps waiving some cost-sharing for certain services, or for patients based on income – that are disqualifying. This bill, if passed, would prevent state mandated benefits and coverage from disqualifying Health Savings Account contributions.

The Case against Decoupling

Opponents of decoupling (among whom are Health Savings Account supporters) argue that tying eligibility to open and fund an account to a specific plan design represents a covenant, rather than merely a tax break. If anyone can open an account, then Health Savings Accounts become just another tax break whose future is subject to the whims of members of Congress looking for revenue to fund a pet program or redirect healthcare spending. When the HSA-qualified medical plan is a prerequisite to opening and funding the account, the owner sacrifices something (greater insurer reimbursement) in exchange for a tax benefit.

Health Savings Accounts and the Pandemic

Sens. Ted Cruz (R-TX) and Ben Sasse (R-NE) and Reps. Ted Budd (R-NC) and Chip Roy (R-TX) have introduced legislation (S. 3546 and H.R. 6338) that waives the requirement that an individual be enrolled in HSA-qualified medical coverage to open and fund a Health Savings Account. Their legislation would open the door for millions of hard-working Americans, including working seniors and those covered on plans with high deductibles that aren’t HSA-qualified), to enjoy the benefits of an account during the current pandemic.

Whom does this legislation help? Let’s look at those who may benefit:

Unemployed. The unemployment rate is 14.7%, with more than 20 million Americans out of work – most within the last two months. That’s the highest level of in nearly a century.

Workers who’ve lost their jobs and are collecting unemployment benefits or are entitled to COBRA continuation of their group plan can pay their premiums with pre-tax dollars through a Health Savings Account, rather than paying the insurance distributor directly. Ideally, Congress would temporarily raise contribution limits beyond the $3,550 (self-only)/$7,100 (family) limits in place in 2020. A temporary increase to $10,000/$20,000 would cover premiums and out-of-pocket costs for most people, whether they continue their group plan or purchase other coverage.

If Congress subsidizes premiums for laid-off workers (members are talking about COBRA subsidies up to 100% of premium), an alternative to paying insurers would be to contribute the funds directly to Health Savings Accounts and allow recipients to purchase coverage either through COBRA or from a public or private marketplace. Regardless of how the subsidy is structured, both the subsidy and the recipient’s share of premium would be tax-free through a health Savings Account.

Working seniors. Many working seniors enrolled in HSA-qualified plans have always faced restrictions that other working seniors and younger co-workers haven’t faced. If they draw Social Security benefits, they can’t receive employer contributions or make their own deposits into their accounts. If they work for a small company (fewer than 20 employees), their employer’s insurer may require them to enroll in Medicare, thereby disqualifying them from funding an account. Yet Medicare’s hospital deductible is $1,408 (versus $1,400 for an HSA-qualified plan), and the average Medicare recipient spends more than $3,000 out-of-pocket annually.

Medicare recipients are enrolled in plans with high deductibles. This legislation would extend the benefits of Health Savings accounts to them – at least through the pandemic.

Everyone else with medical coverage. The pandemic has been financial shock therapy for many Americans. Surveys show that 60% of all families don’t have $1,000 saved to meet a sudden emergency, like replacing a water heater or repairing a transmission. Even among the 85% of the pre-pandemic working population that remains employed, angst runs high. These families would have at least a temporary opportunity to open and fund a Health Savings Account. They could then use those funds to reimburse tax-free any qualified expense that they incur at any time in the future. A Health Savings Account won’t provide tax-free funds to replace the water heater. But an emergency medical fund would help with future medical costs. And if they have qualified expenses that they don’t reimburse immediately, they can withdraw funds later to replace the water heater without incurring taxes and penalties, as long as the cost of the replacement is offset by qualified expenses not already reimbursed.

Will this approach become law? Stay tuned as Congress debates the next pandemic-response bill (dubbed CARES Act 2.0) during the next month or so. Democrat leaders in the House (who are taking the lead writing the next bill) generally favor delivering COBRA subsidies directly to insurers, rather than funneling money to families through a Health Savings Account and allowing them to buy coverage.

Party leaders have never embraced wholesale expansion of Health Savings Accounts (although some members have co-sponsored and voted for bills that increased the number of people with access to accounts). But Democrats and Republicans in both the Senate and the House overwhelmingly approved provisions in the CARES Act that allow Health FSA participants and Health Savings Account owners to purchase over-the-counter drugs and medicine (and expanded the definition to include menstrual products) without a prescription. And they allowed HSA-qualified plans to offer telemedicine services below the deductible on plans with effective dates prior to Jan. 1, 2022.

So, there is precedent for recognizing the role of Health Savings Accounts in the current pandemic.

The Republican Study Group, which includes about three-quarters of the GOP caucus in the House, has made this legislation its top healthcare priority in its pandemic-response strategy. Republicans are in the minority, which limits their influence in legislation drafted by the House majority. But they have an opportunity to bring their ideas to the American people and to Senate Republicans, who control the upper chamber.

Senate Republicans have only recently begun to focus on their priorities in the next major bill, preferring to track the results of the nearly $3 trillion of spending authorized in the CARES Act to determine what’s needed next. GOP leaders in the Senate will be more inclined to support Health Savings Account expansion. The wild card is whether they’ll draft their own bill independent of the proposed House legislation or use that bill as a template from which to make incremental changes. Following the former approach enhances the prospects of account expansion.

Expect supporters of decoupling to stress the importance of allowing Americans to seize more control over their health and healthcare spending. They’ll argue that it’s better for government to suffer a loss of tax revenue to empower ordinary people to make these decisions than to spend a lot more money in a less-targeted effort to push taxpayer money to people.

Expect opponents to dismiss the concept, arguing that government relief should target providing cash to people to support coverage and financial structures in place prior to the outbreak of the novel coronavirus.

The Trump Administration expanded the use of short-term, limited duration medical plans as part of its strategy of administrative expansion of coverage options. These plans, which have lower premiums and require medical underwriting, are designed for people who need to fill a temporary gap in coverage. But beware, The Commonwealth Fund reports – many of these plans provide inadequate coverage for COVID-19 testing and treatment.

Are you aware of how your spouse can enhance or undermine your Health Savings Account strategy? Read one of my recent HSA Wednesday Wisdom articles (published on LinkedIn) to learn more.